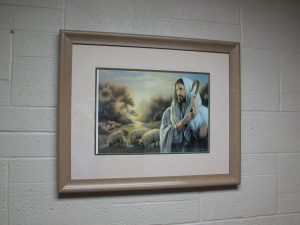 Liturgical art is any work of art that pertains in some way to the rite of Christian worship. This may include the altar, furnishings, vestments, candles, banners, and other ritual objects and architecture. All of these (and more) play a role in the divine worship service. The liturgical arts team may be made up of woodworkers, crafters, artists, painters, sewers and many others with liturgical creative ideas and skills. The arts group will present ideas and plans to the Music and Worship Committee at the monthly meetings.

St. Martin of Tours and the Beggar Painting 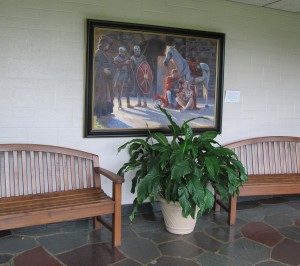 In 2002, we commissioned renowned Annapolis artist Lee Boynton to create an oil painting of St. Martin of Tours and the Beggar which hangs in the narthex.

This painting depicts the historic 4th century figure of Martin of Tours who as a young Roman soldier saw a shivering beggar on a cold winter day outside the gates of Amiens in southern France. In an act of compassion, Martin drew his sword, divided his own cloak and gave half of it to the beggar. The next night in a dream, Martin saw Christ in heaven wearing half of his cloak. The words Christ spoke were simple: "Martin, still a catechumen (a beginning student of the faith) has covered me with his cloak." Later, Martin was noted for his amazing compassion for others and his rejection of the usual finery of a bishop's office and attire.

The painting is of our namesake and reminds us of the words of our Lord Jesus: "In as much as you have done it for one of the least of these my brothers and sisters, you have done it unto me." Another Martin, Martin Luther, was baptized on November 11, 1483, when his parents named him after St. Martin of Tours.  The painting was dedicated on St. Martin's Day on November 11, 2001.

The artist, Lee Boynton, lived and painted in Annapolis since 1979. He was well known for his three paintings at City Hall, which celebrated 300 years of Annapolis history, and also for his historic depiction of 18th century London Town. He was esteemed for his light-filled scenes of the Chesapeake Bay and the coast of Maine.  His work has been selected for many national and international exhibitions.